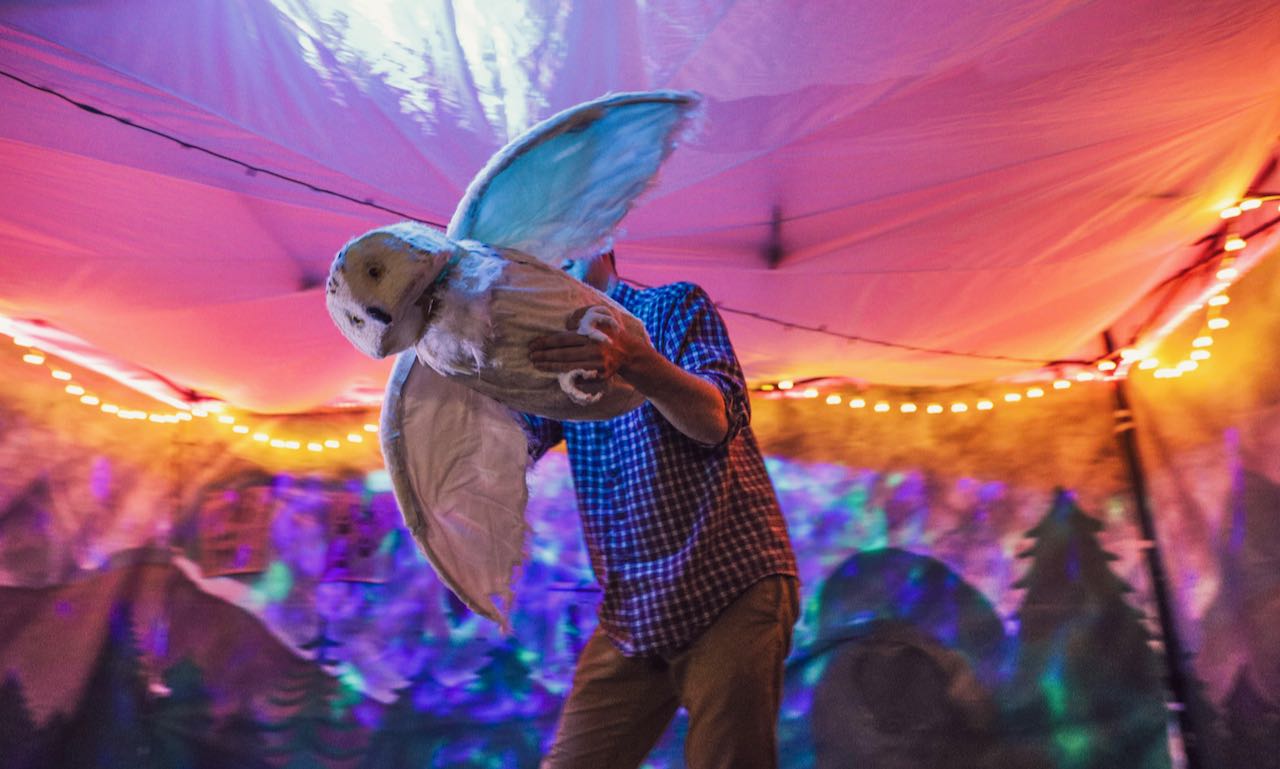 In November of 2017, and again in 2018, I had the privilege of traveling to Burlington, VT, to develop a new Red Kite Adventure in collaboration with an awesome team of VT-based theatre artists. Over two weeks, I collaborated with Jacqui Russell, CCT’s artistic director, and Kat Redniss, from the Flynn Center in Burlington, as well as a team of four local actors, and a local musician, to create the show that would become Red Kite Green Mountain.

Our work on the show began in Chicago, in conversation with Kat. Jacqui and I were drawn to the outdoors-y references Kat brought up, and we began to craft a piece that was structured as a nature hike through the Green Mountains of Vermont, meeting different animals in their natural habitats. As we developed the piece, both in a workshop form in 2017 and as we built out the final version in 2018, I was really excited to explore two design ideas that I’d been interested in for some time.

While we were selecting animals for our “adventure,” Jacqui reached out to a young friend on the autism spectrum, Henry, and asked for feedback on which animals we should feature. Henry’s insights and ideas were so imaginative and helpful and we incorporated many of them into our final creation. Each of the animals was represented by a large, soft-sculpture style puppet – imagine a 2-foot-tall stuffed animal. I worked with Chicago puppet artists Grace Needlman, Jacky Kelsey, and Maddy Low to design and build these puppets, and we focused in on creating a variety of textures for each creature so kids could interact with them and they were satisfying for both visual and tactile engagements.

I found a way to connect my interests in making site-specific and immersive theatre by designing a folding tent which contained the set of the show. Working with Chicago designer Spencer Donovan, we engineered and painted a forest interior onto an existing folding tent – creating a space that was portable and immersive.

What amde this piece feel especially exciting in reflection was that it was truly a collaboration between Chicago artists and Vermont artists. Without the contributions of Kat and our Vermonter friends, we never would have found our direction. And without the skill of the Chicago puppet and scenic artists working on the show, the piece never would have come together as it did. All in all – another reason why collaboration (whether local or national) allows us to create things we never could make on our own.

You can see a little bit more of the show – performed by the Vermont cast! – here: